Since the idea of recreating Classic British Box Art worked so well and was so popular we decided to have another crack at it this year. Ten all new builds made it to Scale Model World 2012, and they were (literally) bigger and better than last years crop.

Thank you to all those people who stopped by to give us kind comments and have a chat, it was a pleasure to meet you all.

We also got blogged again by those lovely people at Osprey publishing The Modelling News.

We will be taking this on the road as before and hope to have a couple of extra builds that didn't make SMW due to a minor issue of a hurricane. We hop to be again at Huddersfield, Shropshire and Farnborough shows in 2013.

Cosford Success and Yet One More Show

Alan, now official CBK Showman, and Tom did a great job of setting up the display at RAF Cosford for the Shropshire model show last Sunday. I wondered in, eventually, after having to catching several trains, and let them free to go for a wonder. They were already tired from a busy start of the day. Despite our pitch being at down the end of a row we caught people's attention and had steady traffic throughout the day. It was glorious weather outside and as well as modellers there were the general public who had visited the museum and got the added bonus of a free model show. Also a massive biker's rally on the airfield swelled numbers still further.

The light and airy surroundings made for a really pleasant show and it was well past the official end of the show before we packed up.

Alan buzzing with excitement contacted IPMS Farnborough and we can now confirm that Classic Box Art display will be making a final appearance at Modelfest 2012 on the 22nd September.
Posted by CBK at 9:45 PM No comments:

An extremely busy Huddersfield show proved a great success despite cramming most of the models into half the display space we had at Telford. 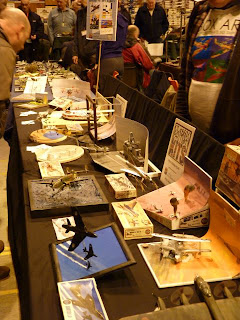 You can catch us again for our first Shropshire Modeller's Show held at the RAF Museum Cosford this Sunday April 1st ... honest we will be there!
Posted by CBK at 9:49 PM No comments: